Antioxidants: Eat All Your Colors Of The Nutritious Rainbow!

As the name implies, antioxidants are substances that are capable of counteracting the damaging, but normal, effects of the physiological process of oxidation in animal tissue.  Antioxidants are nutrients (vitamins and minerals) as well as enzymes (proteins in your body that assist in chemical reactions). They are believed to play a role in preventing the development of such chronic diseases as cancer, heart disease, stroke, Alzheimer’s disease,Rheumatoid arthritis, and cataracts.

Antioxidants block the process of oxidation by neutralizing free radicals. In doing so, the antioxidants themselves become oxidized. That is why there is a constant need to replenish our antioxidant resources. Antioxidants also help neutralize free radicals which cause cell damage, which ultimately can lead to diseases of the heart and cancer.  It seems everywhere you go its blueberry this and blueberry that.  You have your choice of wild

How Antioxidants work can be classified in one of two ways:

The effectiveness of any given antioxidant in the body depends on which free radical is involved, how and where it is generated, and where the target of damage is. Thus, while in one particular system an antioxidant may protect against free radicals, in other systems it could have no effect at all. Or, in certain circumstances, an antioxidant may even act as a “pro-oxidant” that generates toxic oxygen species.

There are many common foods high in antioxidants and you should not just restrict yourself to one particular food source.  Why?  Well, have you ever heard the expression, “eat your colors?”   That refers to the fact that foods are in different color “families” containing different types of antioxidants which have different benefits.  The good news is that you can eat healthy foods high in antioxidants (by eating them raw, cooking them, or juicing them yourself) without having to pay a high price for the “flavor of the month” antioxidant juices being peddled in the supermarkets.

So, give your blueberries some company at the dinner table.  Invite some beans, spinach, potatoes and artichoke hearts and enjoy your antioxidants! Let’s now further discuss the true ‘rainbow of color’ in detail and the diverse array of foods you can eat to receive antioxidant nutrients.

Antioxidants from our diet appear to be of great importance in controlling damage by free radicals. Each nutrient is unique in terms of its structure and antioxidant function.

Vitamin E is actually a generic term that refers to all entities (eight found so far) that exhibit biological activity of the isomer tocopherol (an isomer is one of two or more molecules that have the same chemical formula but different atomic arrangements). Alpha-tocopherol, the most widely available isomer, has the highest biopotency, or strongest effect in the body.

Because it is fat-soluble (and can only dissolve in fats), alpha-tocopherol is in a unique position to safeguard cell membranes — largely composed of fatty acids — from damage by free radicals. Alpha-tocopherol also protects the fats in low-density lipoproteins (LDLs, or the “bad” cholesterol) from oxidation. A 1997 study published in the Journal of the American Medical Association found that 60 mg of Vitamin E a day strengthened the immune system in a group of healthy patients at least 65 years old, and 200 mg  generated a four-to-six fold improvement after four months. However, 800 mg of vitamin E resulted in worse immunity than receiving no vitamin E at all. 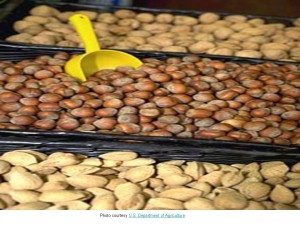 Vitamin C, also known as ascorbic acid, is a water-soluble vitamin. As such, it scavenges free radicals that are in an aqueous (watery) environment, such as inside your cells. Vitamin C works synergistically with vitamin E to quench free radicals. Vitamin C also regenerates the reduced (stable) form of vitamin E. 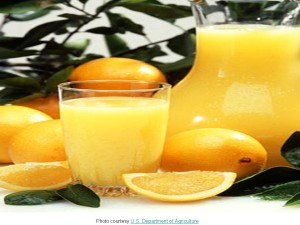 Beta-carotene, also a water-soluble vitamin, is the most widely studied of the 600 carotenoids identified to date.       It is thought to be the best quencher of singlet oxygen (an energized but uncharged form of oxygen that is toxic to cells). Beta-carotene is also especially excellent at scavenging free radicals in low oxygen concentration.

Selenium is a trace element. It is a mineral that we need to consume in              only very small quantities, but without which we could not survive. It forms the      active site of several antioxidant enzymes including glutathione peroxidase.

Similar to selenium, the minerals manganese and zinc are trace elements that form an essential part of various antioxidant enzymes.

Zinc is considered to be an essential mineral and occurs naturally in certain foods, the National Institutes of Health report. Oysters have more zinc content than any other food source. Six medium servings of oysters contain 76 milligrams of zinc, more than 500 percent of the daily value, according to the U.S. Department of Agriculture.

Nearly all green vegetables have a chlorophyll molecule that contains magnesium, the NIH reports.

Spinach and Swiss chard are the two leafy vegetables with the highest magnesium content, the World’s Healthiest Foods website calculates. Other good sources of magnesium include cooked halibut, dry-roasted almonds and cashews, cooked soybeans, shredded wheat cereal, fortified oatmeal, baked potato and peanut butter. Each has 50 milligrams or more of magnesium, which is at least 15 percent of the daily value.

Many dried fruits are a good source of both magnesium and zinc. 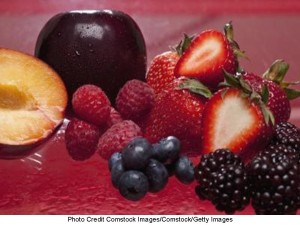 Add dried fruits to your favorite trail mix or bowl of cold cereal. Of                course, in addition to eating plenty of fruits and vegetables, getting              regular exercise and abstaining from tobacco use are very critical to a        healthy lifestyle.   Over the last several years, the Board has been updating and expanding    the system for determining the RDA and UL values, which are now collectively referred to as the Dietary Reference Intakes, or DRIs.

The following recommendations were made for consumption of antioxidants in the 2000 report, “Dietary Reference Intakes for Vitamin C, Vitamin E, Selenium, and Carotenoids”:

For those analytical and biological minded readers, let us look at the process of producing antioxidant enzymes.  The antioxidant enzymes superoxide dismutase (SOD), catalase (CAT) and glutathione peroxidase (GPx) serve as your primary line of defense in destroying free radicals. SOD first reduces (adds an electron to) the radical superoxide (O2-) to form hydrogen peroxide (H2O2) and oxygen (O2).

Catalase and GPx then work simultaneously with the protein glutathione to reduce hydrogen peroxide and ultimately produce water (H2O).

Together, they repair oxidized DNA, degrade oxidized protein, and destroy oxidized lipids (fat-like substances that are a constituent of cell membranes). Various other enzymes act as a secondary antioxidant defense mechanism to protect you from further damage.

In addition to enzymes, vitamins, and minerals, there appear to be many other nutrients and compounds that have antioxidant properties. Among them is coenzyme Q10 (CoQ10, or ubiquinone), which is essential to energy production and can also protect the body from destructive free radicals. Also, uric acid, a product of DNA metabolism, has become increasingly recognized as an important antioxidant. Additionally, substances in plants called phytochemicals are being investigated for their antioxidant activity and health-promoting potential.

The juices are fortified with botanical extracts that help maintain healthy cellular and physical functions. The New England Journal of Medicine reports that 9 out 10 people die from dietary deficiencies. When the body is completely clean, the result is the protective organs functioning properly helping to eliminate toxins that aren’t healthy. I am excited to be able to ‘share and show’ an amazing product with all of these key antioxidants – with documented phenomenal results! 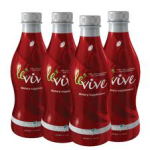 With these super fruits at the helm in an organic compound these products can help with, energy complaints, aches and pains, and maintain healthy levels of blood sugar, protects the liver, preventative care, and sustain health. Click on the ‘Shop’ tab or

Visit: http://www.ThewWeightLossCafe4Ever.org and order your Ardyss Red LeVive for $50.00 TODAY!

*These statements have not been evaluated by the US Food and Drug Administration. This product is not intended to diagnose, treat, mitigate, cure or prevent any disease.

Just for listening and taking the time to see for yourself — AND hopefully you leaving a comment — I want to give you something!

I am excited to be able to ‘share and show’ this amazing product and other key nutritional products – as well as 5 industry streams all under the Ardyss umbrella!

PS – Check This Out and let me know what you think!  Has been a great, easy fundraiser for our  ministry!   People just like you are using this program right now to pay down their bills, setup a college fund for their kids, take more time with their family, and retire years earlier than they ever planned.   Visit:   http://tinyurl.com/mmqhaye

Please give us your email to stay connected with us!

8 Responses to “Antioxidants: Eat All Your Colors Of The Nutritious Rainbow!”